You are here: Home1 / ‘Akikiki 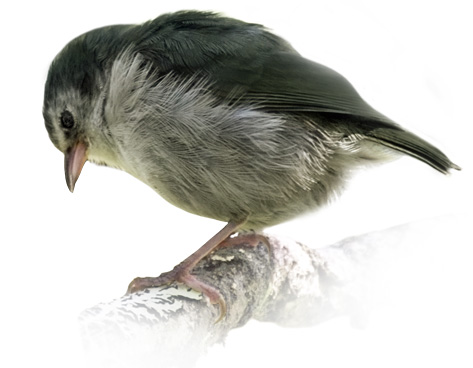 The ‘Akikiki, like the other endangered species on the island, is endemic to Kaua’i. Fossil records show that this species once inhabited forests down to sea level. First described in 1887, this small pale gray and white honeycreeper lacks the vibrant red and yellow colors worn by other extant honeycreepers on Kaua’i. Recent population estimates suggest that the already small population is in decline and its range has contracted; these findings led to the federal listing of the species in 2010.  Therefore, in 2011 KFBRP initiated long-term studies of ‘Akikiki ecology and demography as described in the species’ draft Five-year Recovery Plan to assess causes of the species’ decline and inform its recovery. Surveys conducted in 2018 and reported in (Paxton et al., 2020) estimate a population of just 454 individuals. A 2021 study predicted their overall range to be 38km2 and their nesting range to be only 17.59km2 (Fricker et al. 2021).

Like the ‘Akeke’e, the ‘Akikiki has been the subject of only a few studies, many summarized in Hawai’i’s Comprehensive Wildlife Conservation Strategy ‘Akikiki Fact Sheet.  The few ‘Akikiki nests that have been found were all high in in the crowns of ‘ōhi’a trees, and were composed of moss, small pieces of bark, bits of lichen, and fine plant fibers.  ‘Akikiki reproductive behavior has been observed from January through July.  This species does not often rear more than one brood of 1-2 eggs per year because of the long juvenile dependency period: like other Hawaiian creepers, juvenile ‘Akikiki may stay with their parents for up to 3 months after fledging (Hammond et al. 2014).

Vegetation surveys and occupancy sampling was conducted for ‘Akikiki and ‘Akekeʻe at plots across the Alaka’i Plateau in 2012 to assess range-wide occupancy and habitat use (Behnke et al. 2016). Occupancy rates for both species increased from west to east along the plateau, but were low throughout the ranges of both species.

Ruby Hammond conducted a study (From March – June of 2012 and 2013), to investigate factors that affect reproductive success of native, arboreal nesting songbirds on Kaua‘i, including the impact of rodent predators. The endangered ‘Akikiki had high nesting success (77 %) relative to other bird species (57 %), and relative to mean nesting success of Hawaiian forest birds (46 %). Nest predation was not a major cause of nest failure for the endangered species, although ‘Akikiki suffered some nest predation, but it was attributed to at least 40% of failures overall.  This study has resulted in two published papers (Hammond et al. 2015, Hammond et al. 2016).

‘Akikiki are usually seen traveling and foraging in pairs or in family groups in forests of the Alaka’i area at elevations above 1,140 meters.  They eat invertebrates, which they find by pecking and pulling at the bark of snags and tree trunks of species such as ‘ōhi’a and ‘ōlapa.  Once an ‘Akikiki pair or family group is spotted, they can be watched for long periods of time as they move up and down along branches in the understory. Identifying them by sight is easier than identifying them by sound, as ‘Akikiki sound much like ‘Akeke’e, ‘Anianiau, and  Kaua’i ‘Amakihi. 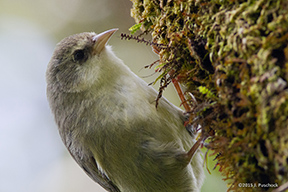 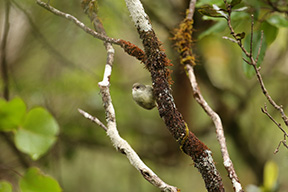 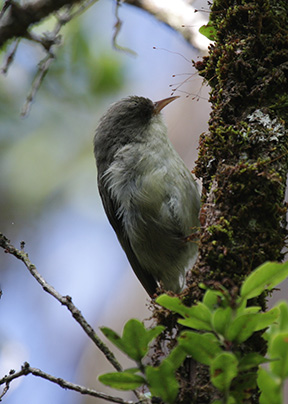 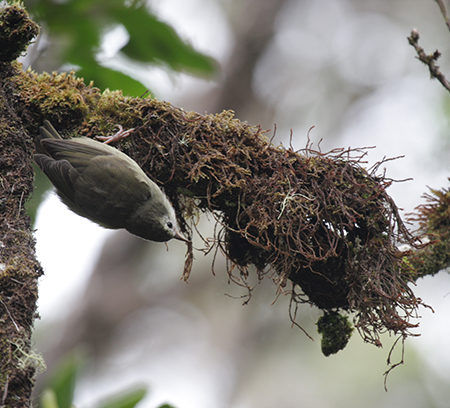